I know it's been a very long time, but I've been producing the weekly paper here in Congleton each week using inDesign 1.5 on Windows XP (I'll take the sympathy now, please and thank you) since coming home, and I had a thousand things to do before my Mum's wedding after being roped into seating plan and favour tag making. But I'm here now!

During this time away, I've been thinking about my own personal branding and how it could be improved, as it currently consists of a social media emblem which is literally a sketch of myself cropped down to the face.

I should probably preface this by saying I'm not really a branding buff and I haven't thought about branding in a while, but I really wanted to give this a go to help myself in future- this mini project might even be a practice rather than a real shot, but I at least want to become more aware of how to go about branding myself before the end of year 3 suddenly emerges, bringing great panic with it. Therefore, I have challenged myself with the task of producing a sparkly new personal brand complete with logo, type and colour specifications- and a business card.

I must say the NTU Graphics degree show gave me a bit of a kick up the bum to start thinking about my personal branding. I saw a lot of great business cards which put my little sketch to shame. I really loved this simplistic but well communicated approach from Chloe Hillier. It definitely caught my eye (maybe I'm biased because of the blue-pink colour scheme?) as I loved the use of illustration for that hand made feel, choice of type on the back and the use of white space, which is something I need to work on personally. The lighthearted addition of 'hard-worker' to her title gives the impression that she is approachable but confident in herself. This was probably my favourite business card of them all!

Another blue and pink ensemble drew me in- I promise they're not all like this - but for a different reason. Unlike all of the other business cards I saw, which consisted of the designer's name or logo being the forefront of the identity, this one uses a pattern.

Helen Cooke chose to summarise herself in a pattern rather than a singular set of type or images that are neatly tied up and constrained to a set shape. It's an infinite pattern that uses the whole of the business card which could expand as far as you can imagine. It's a great use of space. It also gave me serious summery-beachy-seashell vibes (bonus points for that). She too wasn't afraid to use white space on the back; which makes total sense given how busy the front is. This gives the pattern and the type their own space to breathe (but isn't something I would've necessarily clocked on to without analysing this example).

This next example from Dan Steward really contrasted the whole atmosphere of the degree show; the black stood out against the white walls, brightly coloured banners and white stands. The simplicity of this one makes it incredibly effective- the infinite loop of Dan's name is an extremely clever idea. As I read around the ring, I found myself going around a few times to decipher it fully, then understanding that the name was an endless loop. This mechanic really encourages interaction from the viewer; something that I didn't really see from most other business cards in the group. The use of holographic foiling also interested me as this demonstrates the extra care and time Dan must have put into the design- also creating a sense of quality; a concept I see quite often in luxury packaging designs. 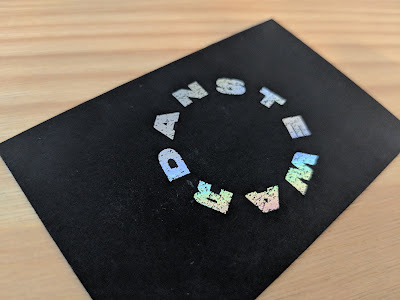 My final favourite was actually from one of the set/ environment design students, but my interest was immediately peaked by the unique form factor of the business card. Instead of wasting space on a standard sized business card, Abbie Skinner-Biring used a narrower and shorter size to keep the card compact and to fit her personal logo better. I found this really interesting but felt it could have been implemented better as the card has to be rotated to read the contact details on the back. Abbie also made use of a QR code- but are they still a big thing today? They were certainly popular a couple of years ago, but I'm not so sure now. Regardless, I really liked the concept, even if it means someone a little clumsy like me is more likely to lose the card.

Looking at these examples have really helped me to get a sense of what I should be aiming for with my personal branding as a student; but I still definitely feel that research into social media avatars specifically would help me to produce something I can use consistently on everything related to me. That's next on the to-do list!