While doing my food shopping just last week, I was searching for some kind of 'healthy' cereal I could use to kick out my coco pops cravings without the fat and sugar. On my search, I found a lovely cereal called Alphabites from the popular brand Bear (mostly known for their healthy snack ranges) with even lovelier packaging. It seems as though the product is actually aimed at children, but it stuck out from every other cereal box in the aisle, appealing to me right away. Even the crate holding the batch was smart, actually replicating the box design below it so the bear paw holding the bowl underneath was not lost. 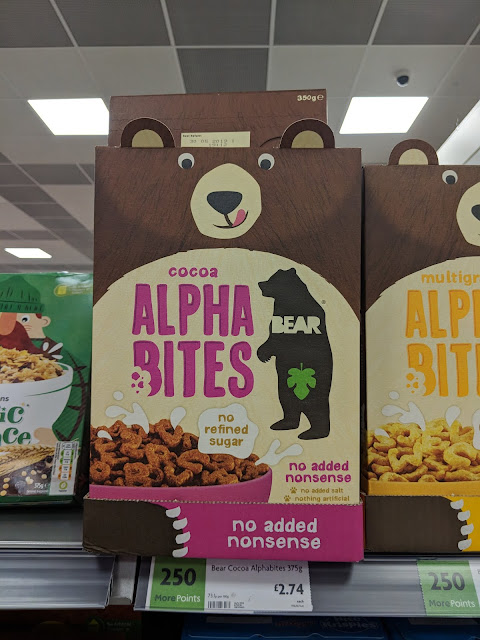 On first inspection, the implementation of the bear character was what I was drawn to; rather than simply having a character ON the box (like almost every single cereal box around it), the character WAS the box. Almost like a toy, the bear is a more tangible being than just a flat image. Each side of the box is a different side of the bear- the back even features a bear backpack with puzzles included for children. I thought this was a great, fun way to grab the attention of children while giving structure and consistency to the whole surface of the box, rather than random nutrition tables interrupting the design with no rhyme or reason, like on many cereal boxes I've seen before. In particular, I loved the implementation of the nutritional facts on the bear's spoon as it didn't feel like a distraction or that it was ruining the bear aesthetic in any way. The whole design feels fluid, consistent, but most importantly, fun.

This was further emphasised by the addition of bear ears poking up from the box itself, showing that the bear was not constrained to the shape or size of the box. Importantly, this addition is realised without excessive effort or materials; adding to the very natural and eco-friendly values suggested by the surface design of the box and the product being advertised as completely natural.

In fact, the ears are simply cut out and bent forward as the front of the box is the same piece of card as the flap. This way, no extra material is used but the top of the box is still sealed as the flap underneath keeps it closed. How inventive! (but also very doable!)

While speaking about the card though, I should really mention the texture and feel of it. Unlike your standard shiny, thin and flimsy cereal box card, the alphabites box feels luxurious but completely sturdy. Matte in nature, the card feels of a very high quality, and almost organic due to its soft texture. This communicates the quality and feel of the product inside too, giving potential customers a sense that they are going to get what they're paying for - which is extremely important for a cereal that is £2.74 per (rather small) box!

In terms of the front surface design, I was pleased to see the use of textures to give the product life and make it feel more natural and real, compared to the purely vector based designs around it in the aisle. The bear fur, bowl and bear silhouette all have a texture, whether it's hand drawn hair or a faded monoprint-esque pattern. The textures are not over used though; the bear eyes, tongue and elements on the back of the box are left as vectors to ensure the textures don't become too overwhelming. I adore the colour scheme on the box as it is very gender neutral in it's approach; the pink is bright, almost neon, making it appropriate for any child, especially when paired with green and brown. This theme is reflected in the Multigrain flavour box, as yellow replaces the pink- another neutral choice. The typefaces work well to further communicate the natural aspect of the product, with different elements of type having various thicknesses, also giving a hand drawn and playful feel to it. All of the elements work together to the common goal of appearing as natural and healthy as possible, while still appealing to children to encourage healthier eating.

Overall, I love the design of the box and feel it is very effective at what it is trying to do. Upon further research, I discovered that the group B&B Studio was behind the design, as well as for other products created by Bear:

B&B Studio are also responsible for other quirky packaging designs like this one for Dalston's drinks cans, which I absolutely love - they may be one of my next posts!

Regardless, more packaging probe will be coming soon (and maybe some book covers, as they've really been catching my eye recently).