Nothing ever really happens in Congleton (nothing of interest anyway) with it being such a small town. So when something does come along, you have to grasp it with all you've got. Especially when it's received special treatment with a leaflet that doesn't have comic sans on it.

Enter our annual Jazz and Blues festival, which I noticed had received a facelift last year with posters that had really been given some thought. This time around, our local design studio, AD Profile Design Works, has produced an A6 size leaflet detailing the times and locations of the performances this year: 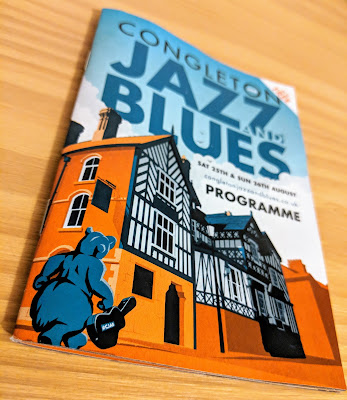 I was quite surprised when I first saw this; I actually really like the cover of the leaflet. The minimal colour scheme gives the event a clear identity and gives the leaflet consistency, even though the festival will take place across multiple locations with a lot of different people involved. The main image here depicts one of Congleton's oldest pubs, the Lion and Swan, with a bear walking towards it (bears are commonly used to represent Congleton- our nickname is Beartown, resulting in shops, pubs and a radio station named after it). The lack of stylisation in the image reflects that our town is quite old in its' ways, mannerisms and style; as a small town, you're not going to find any form of modern design here. However, the vectorised illustrations are a step in the right direction, moving us away from constantly using photography.

The only element I feel that could be improved is the typography; it feels quite standard, not unique to the festival or feeling behind it. Although I like the idea of using negative space to house the 'and' in the event's name, it could have been implemented better. I do like the interaction between the typography and the illustration though; the overlapping of the clouds onto the title and birds flying through the U in 'Blues' gives a sense of a complete image with all elements working together, rather than separate type and image that feel disjointed. The front cover does a good job of catering to an extremely wide audience, as although most people attending will be older adults, there may be younger people or families who are interested in the event, especially after seeing this booklet or one of the posters around town with the same style.

Inside the booklet, the first page houses a map that charts where each venue is within the town centre; this is a nice addition and caters towards people who aren't local to Congleton, so wouldn't know the location of every pub.

The map communicates the location of the venues well; it's simplified but geographically accurate, giving people a good sense of the distance between venues and the actual location of them in relation to eachother, much more so than if a schematic map had been used. Street names are also present, aiding people to find their way around based on street signs in conjunction with the map. A small key is found on the page opposite the map, explaining the layout of the rest of the booklet and how to identify events that are on either the Saturday or Sunday. I can understand the inclusion of this key but as it wasn't the focus of the page, it was easily lost and I actually missed it the first time I looked through the booklet.

I really appreciate the inclusion of a schedule at the start of the booklet, though. This allows people to see every performance at a glance rather than flicking through the booklet to find performance times in the midst of extra details about each act that some people may not want to read.

Some pages use vector illustrations similar to the cover illustration in order to give the pages more interest and highlight the key venues in the event, such as the Town Hall and the Lion and Swan. These are absolutely lovely additions; they really make the pages stand out while communicating the venues visually, breaking up the sea of text that could otherwise drown the booklet and make it a little boring. The illustrations also interact with the photographs, overlapping them, or allow text to sit around them.

Unfortunately, these vector illustrations are few and far between- I would have loved to see more throughout the booklet, even if they were slightly smaller than the examples below. Photographs of the acts are used throughout though, allowing readers to get a sense of the performers without having to read about them. This does, however, make some pages feel crowded, as a lot of information is squashed onto each page.

The visual language established by the key (Saturday is blue and Sunday is orange) really works; at a glance, you know which events to look for, especially as most people will only attend the Saturday afternoon or evening performances. For this reason alone, I feel that the booklet does an excellent job at meeting its function. Venues and performances are easy to find, and the map then makes navigating through the festival easy.

I do almost wish that the booklet felt more substantial; either at an A5 size or with a thicker cover. The booklet is kept together using staples, which does the job, and the stock feels better than most leaflets around here, being a slightly thicker version of the shiny paper commonly used. The booklet doesn't scream quality, but it really doesn't have to. In context, it will most likely be found in the bottom of a handbag, inside a jean pocket or left on a bar table after the festival is over.

Overall, I really do like this booklet as an example of functional design. After all, designers are problem solvers, and this booklet solves its problem well. Some of the design elements are actually quite appealing here, too. Regardless, I feel that I've become more aware of local design; this has been a great reminder to look out for what is physically around me in future, rather than relying on my Instagram feed all the time.