After the talk from Sam Arthur - the joint founder of Nobrow publishing - at the NTU graphics festival this year, I felt compelled to keep an eye on what Nobrow were releasing (especially after seeing great examples of the books they have published previously in the talk- and loving all of them!). One that stood out to me was Hamish Steele's new book, DeadEndia: The Watcher's Test, with its paranormal theme and Steven Universe-esque illustration style.

I knew at first glance that this was a book for me (even if it's meant for readers 8 and up) because I for one love paranormal storylines with weird monsters and strange backstories. I also loved Hamish's illustration style as soon as I saw it, as it is similar to my own and others that I am inspired by. It was the cover design of the book, however, that made me buy it. I really like the use of the orb in the centre splitting the cover into panels; a great mechanic for separating the characters into groups, also replicating a comic book style panel layout. The use of colour shading to make the secondary characters blend into the dark purple background really helps to keep the focus on the main characters and title of the book, as well as their contrasting colours. The characters interact with the borders of the panel too; Barney, the main character, stands through all of the panels, his arm overlapping the border to demonstrate that he is the focus. I really liked this technique as it creates more of a 3D effect on the cover. The inclusion of the Dead End house at the bottom of the cover and silhouette of the theme park around it gives a sense of the book's setting well, too. One feature I really appreciated as a graphic designer was the use of a spot varnish on the cover for the orb and its light rays as well as the book title. It really emphasises the orb as a light source, casting light on the other elements of the cover.

I really love the spine of the book, too; the turquoise contrasts the front cover nicely but compliments the turquoise of Barney's hair, the bold type really fits the comic style really well, and the spine isn't overcrowded with the full name of the book or the author- it's simple but bold, which is definitely a breath of fresh air from most other spines.

Inside, the novel really proves itself as a unique blend of fun and great illustration. I adore the colour choices made by Hamish; each spread feels cohesive, with a specific colour palette for each one. The defined colour palettes really help to set the tone of the story, like the example below. Note how the colour palette is completely broken for effect in the last panels of the spread; the contrast between the purple and green really helps to communicate the sudden change in mood as well as the shock and surprise of the characters at that point in the novel. Throughout the whole novel, the colouring feels cohesive; each spread transitions into the next, and consistent pastel tones are used, softening the appearance of characters and environments. 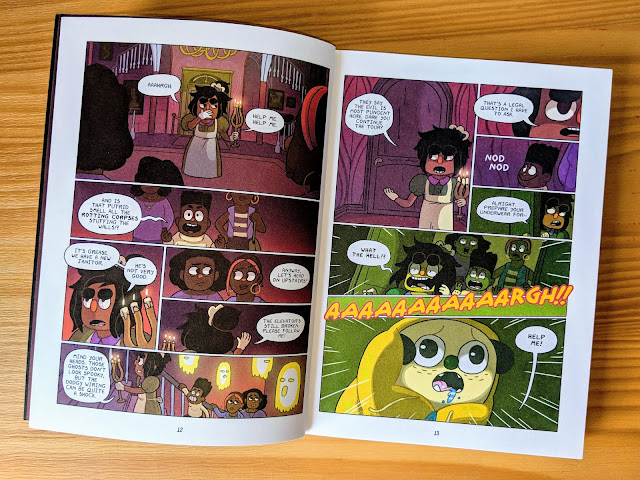 Hamish employs some interesting techniques to demonstrate emotion. This tends to include extreme close ups of character's faces, or cropping to show the most telling part of that emotion (like the close up of mouths to show screaming) in order to communicate what is happening clearly and without unnecessary detail. I also really like the use of intensity lines to emphasise emotion, almost replicating a fast zoom in of a face that you'd find in a TV show or movie. The more common technique of using large text bursting out of a panel is also occasionally used to show screaming. All of these techniques mean that the visual communication of the book is really strong; the events and emotions of characters are always clear. This is definitely a key aspect of the book's function due to it's target audience being quite young. The close ups also make the reader stop and think about the character's feelings and study the detail in the illustrations, which could otherwise be missed when reading the comic due to the small amount of dialogue.

There are also some really interesting angles and perspectives used in DeadEndia. For example, the first page of Chapter 1 really sets the scene with a wide shot. The lightning bolts, dark sky and glowing windows create a classic horror/scary scene, creating an ominous and uneasy mood. However, the notable part of this page for me was the very wide and short panel allowing for a cropped view of the table, really putting focus on it, again removing any unnecessary details. This is followed by the close up panel of Norma's face, further adding to the mysterious/ominous feel as it is unclear as to who - or what - Norma is; we can't see the rest of her face.

The second example below again uses a close up of Norma's mouth to show her anger when shouting Courtney. I really like the choice to show Courtney from behind in this instance; we are seeing things from Norma's perspective rather than from a third person perspective. The visual communication is strong again here, as even without seeing Courtney's face, we know that she is jumping at the sound of Norma's voice due to her body language. The colour palette is broken again here to show the shock that Courtney is feeling; the yellow contrasts the purple to mirror her surprise. There are plenty more really interesting uses of perspective in the book. The angle from Pugsley's height is really interesting as you can only see Barney's foot; but this communicates what is happening much more clearly than if a wider angle had been used, as you can see Pugsley's emotion in detail, while still seeing that Barney is walking away due to the position of his legs.

I thought the use of portrait panels next to each other, each with a different angle of the same subject and moment, really help to put focus on the singing character in the second example. To me, it feels like a montage you would get in a TV show where the camera keeps changing angles around the character while they sing, to add more interest than just a front facing shot. I also think this is a great way to introduce a new character, as the reader is immediately completely familiar with their features so can easily recognise them from then on.

In the third example, the perspective used is completely different, taking a birds-eye view, allowing for the whole room to be seen in one panel, as well as extra details you would otherwise be unable to see like the boxes on top of the bookcase and the pterodactyl hanging from the ceiling. I really appreciate Hamish's technique of using the same character repeatedly throughout the panel to emphasise his sadness and frustration. This is a very concise but interesting way of showing his feelings at that time, without taking up multiple panels of the page with smaller, less detailed drawings. This again feels like something you would experience in a TV show with layered clips of a character from one angle.

I also really liked the angles below. A similar montage technique is used again here, but notably the sky outside the window changes colour in each panel, communicating a passing of time. The lights also progressively turn brighter, signifying the change from day to sunset. I thought this was a clever but interesting way to show what Barney is doing, without it becoming too boring. The montage is followed by another high angle, which helps to communicate the size and creepiness of the building, as the characters look so small inside it. The shadows cast on the close ups of the characters further shows that they are only being lit from above, by the bulbs on the wall, rather than through the windows. This use of lighting definitely helps to communicate that Barney has been working in the house all day.

The other perspective below really caught my eye as it isn't really used again in the book- the view is the bottom of a toilet. The view immediately communicates that something has happened to Barney and he is somehow shrunk, without giving away exactly what has happened by revealing the change completely. This is a great technique in keeping the attention of the reader (especially if they are actually 8 years old); it forces the reader to turn the page in order to find out what has happened.

Hamish uses some really interesting techniques to solidify the context of particular scenes in the book. For example, the use of different speech bubbles to communicate that a conversation is happening via text rather than in person. Hamish uses a computerised font, different colours, and square shaped text boxes to communicate this. The format is instantly recognisable and I personally found it to be a really interesting mechanic for switching back and forth between the characters as they go on their 'dates', rather than showing the whole of one character's experience followed by the other. This is a great way to keep the reader interested once again as they have to keep reading to find out the outcome for each character, while helping to establish a timeline as the two events are clearly happening at the same time.

Another communication technique used multiple times in the book is drawing the stem of speech bubbles off the side/top of a page, or into another panel. This unique direction of speech allows for more page turning moments (like the first example below) or to simply show where characters are or where they are coming from (like the second example). This technique definitely adds interest as it allows elements to be free rather than constrained to their panels, and creates more tension and pace in the book as the reader is forced to turn the page rather than simply looking to the next panel; you can't see what happens in your peripheral vision either, which makes the outcome even more of a surprise. I love this technique and feel like it is a great idea to engage the audience; I'll remember this the next time I try to create my own comic! All in all, I am so pleased with this book (the storyline is great, but I won't bore you with that!) and I'm incredibly inspired by it. I feel like I have learned a lot from this book in terms of colour palette choices, creating great tension, and using perspectives to my advantage in the context of comic books, illustration or any design projects generally. I will definitely keep in mind everything I have seen here to use in future (and will probably purchase Hamish Steele's other book, Pantheon, before then!)

I've really enjoyed writing this as illustration is probably my number one passion, so as soon as I get another comic book, I'll be right back with more in depth look at it's pages!